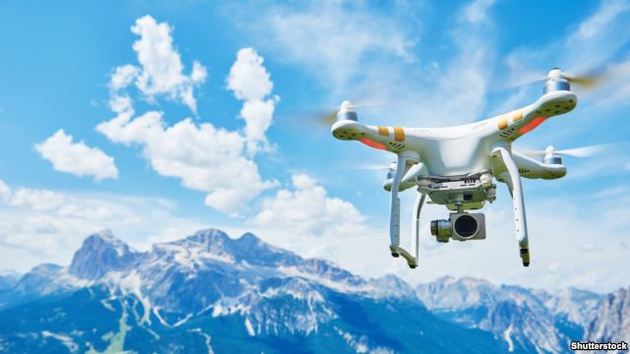 As Europe laces up for Euro 2016, unsettling reports this week underscore fears that Islamic State (IS) or another radical militant group might try to violently disrupt the soccer championship or other major events this summer.

Some of the most chilling reports claimed that files on suspect Salah Abdeslam's laptop made mention of a chemical attack using a commercially available unmanned aerial vehicle, or drone.

But is such a plan feasible?

British chemical weapons expert Hamish de Bretton-Gordon tells RFE/RL that while such an attack is possible, it would be very difficult to pull off.

IS is known to have used chlorine as a weapon against Kurdish Peshmerga fighters in Iraq, Bretton-Gordon says, but an effective chlorine attack would require an amount of the element beyond the carrying capacity of a commercial drone.

"The amounts of chlorine that they could attach to a drone would be very insignificant, and I don't suppose anybody would even notice it," de Bretton-Gordon says. "So I think this is a threat that we should not be unduly concerned about."

Over 1 million foreign football fans are expected to travel to France for the soccer championship.

The payload of a commercially sold drone -- the weight it can lift -- is currently quite limited. Most quadcopter drones, lifted and propelled by four rotors, can buzz around with an onboard camera for up to 25 minutes, although some can carry up to 8 kilograms for shorter periods.

"Commercially available [drones] have a very small payload, and the sort of toxic chemical you would need to have a significant impact would need to be a prescribed chemical weapon, like the nerve agent sarin or VX," de Bretton-Gordon says. "Now that is just not available, and we're pretty certain that [the group] Islamic State haven't got them."

Experts say attacks like those that have used guns or explosives represent the more credible threat.

France is still in the state of emergency declared after the coordinated Paris attacks of November that killed 130 people at a concert hall, near a soccer stadium, and in downtown bars and restaurants. Those attacks have been blamed on IS members or sympathizers.

In an unusual move, the State Department issued only its third travel alert on Europe in two decades, cautioning U.S. citizens on May 31 that "the large number of tourists visiting Europe in the summer months will present greater targets for terrorists."

In addition to the Euro 2016 event, which stretches from June 10 to July 10, the warning mentioned possible threats against the Tour de France cycle race and the Catholic Church's Youth Day in Krakow, Poland, which is expected to draw up to 2.5 million visitors.

French and German spy chiefs also warned recently of the danger of IS attacks during the quadrennial soccer spectacular. As with the U.S. travel warning, they said there was no specific evidence that an attack was being planned.

"I think we're looking at a threat which is genuine and substantial, and I think it's one that security forces are finding themselves having to respond to in this way of elevating concern amongst the public," says Raffaello Pantucci, a counterterrorism expert with the London-based Royal United Studies Institute (RUSI).

Euro 2016 is expected to attract 2.5 million spectators to French stadiums, including 1 million foreigners.

France has announced it will deploy some 90,000 security staff to ensure the safety of the tournament.

British media reported that data on Abdeslam's computer included photographs and mentions of the Old Port of Marseille, where English fans will gather for their