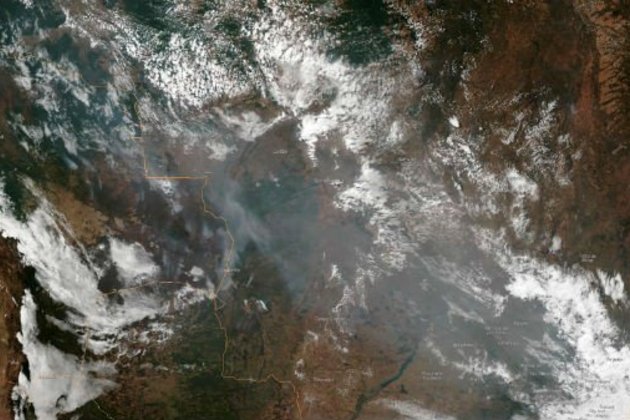 Salvador, Brazil - Paris and the United Nations called on Thursday for the protection of the fire-plagued Amazon rainforest as Brazil's right-wing president accused his French counterpart of having a "colonialist mentality" over the issue.

Official figures show nearly 73 000 forest fires were recorded in Brazil in the first eight months of the year - the highest number for any year since 2013. Most were in the Amazon.

The extent of the area damaged by fires has yet to be determined, but smoke has choked Sao Paulo and several other Brazilian cities in the past week.

UN chief Antonio Guterres said he was "deeply concerned" by the fires.

"In the midst of the global climate crisis, we cannot afford more damage to a major source of oxygen and biodiversity," he said.

"The Amazon must be protected."

France President Emmanuel Macron said the wildfires were "an international crisis" and called on the globe's most industrialised nations to address it at their summit this weekend.

"Our house is on fire. Literally. The Amazon, the lung of our planet which produces 20% of our oxygen is burning," Macron said.

"It is an international crisis. Members of the G7, let's talk in two days about this emergency."

That did not sit well with Brazil's President Jair Bolsonaro.

"The French president's suggestion that Amazon issues be discussed at the G-7 without participation by the countries in the region evokes a colonialist mentality that is out of place in the 21st century," Bolsonaro wrote.

Neighbouring Peru, which contains much of the Amazon basin, announced it was "on alert" for wildfires spreading from the rainforest in Brazil and Bolivia.

Paraguay and Bolivia are battling separate wildfires that have devastated large areas of their rainforests.

Environmental specialists say the fires have accompanied a rapid rate of deforestation in the Amazon region, which in July quadrupled compared to the same month in 2018, according to data from the National Institute for Space Research (INPE).

Bolsonaro instead attributes the fires to increased drought, and accuses environmental groups and NGOs of whipping up an "environmental psychosis" to harm Brazil's economic interests.

"This environmental psychosis lets you do nothing," the president lamented, adding that it was hampering the country's development.

"I don't want to finish the environment, I want to save Brazil," said Bolsonaro, a climate change skeptic who had advocated opening up tribal lands and protected areas to farming and mining interests since assuming office in January.

Bolsonaro's comments come as Brazil hosts a UN regional meeting on climate change in the northeastern city of Salvador ahead of December's summit in Chile.

A senior Brazilian official defended Brazil's environmental policy at the conference and said it complied with the Paris Agreement against global warming.

"We are teaching the world how to produce. In only 29% of our territory we produce food for everyone.

"Worldwide, the average land use for agriculture exceeds 50% - we only use 29%," said Roberto Castelo, an environment ministry official who was roundly booed by greens at the conference.

"I do not defend the burnings, because there always was and always will be burnings. Unfortunately, this has always happened in the Amazon," Bolsonaro said, referring to dry season, land-clearing fires.

"But accusing me of being a Captain Nero setting fire to things is irresponsible. It is campaigning against Brazil," the president told reporters outside his Brasilia residence.

The reference to Captain Nero appeared to be to the Roman emperor said to have fiddled while Rome burned. Bolsonaro is a former army captain.

Forest fires tend to intensify during the dry season, which usually ends in late October or early November, as land is cleared to make way for crops or grazing.

"Just think, if the world begins imposing trade barriers, our agribusiness will fall, we will start to go backwards, the economy will start to get worse - your life, the lives of newspaper editors, television owners, the lives of all Brazilians will be complicated, without exception. The press is committing suicide," Bolsonaro said.

However, there are signs of growing concern from within the powerful agribusiness sector over Bolsonaro's environmental isolationism.

The governors of Brazil's Amazon states have also criticised the government for recent decisions by Germany and Norway to suspend Amazon aid projects.

"This week two big German media outlets expressed the idea that it was time to start boycotting Brazilian products. It's only a matter of time," Marcello Brito, head of the Brazilian Agribusiness Association, told the Valor daily.

"The question is, who is interested in transforming Brazil into an environmental pariah," he asked.

"We cannot change the president of the republic. What our sector can do is work, in a unified way, to try to reverse the damage as much as possible."

GET THE NEWS at your fingertips and download the News24 app for Android here now. Get it for your iPhone here.

LONDON, UK - Shares in the UK and Europe were on the rise on Monday, although markets were quiet with ...

Securities and Exchange Board of India to allow fintech products tests

MUMBAI, India - Stock market regulator, the Securities and Exchange Board of India (SEBI) on Monday decided to allow live ...

SYDNEY, Australia - Shares in Japan sank on Monday as the country's economy recorded its slowest quarterly growth in six ...

NEW YORK, New York - The State of New York will not be appealing the case it jointly pursued with ...

DUBAI, UAE - The 25th Gulfood, which is considered one of the largest food exhibitions in the world has started ...

Taliban confident of reaching deal with U.S. by end of month

ISLAMABAD, Pakistan - The Taliban appeared confident Monday it will sign a peace agreement with the United States by the ...

MILAN - The cardinal's response was not what Yolanda Martinez had expected - or could abide.Her son had been sexually ...

Chinese health officials said Sunday that the number of new cases of the coronavirus has slowed for the third consecutive ...

JERUSALEM - Syria says that Israel attacked five separate targets near Damascus with missiles from the Golan Heights. Israel did ...