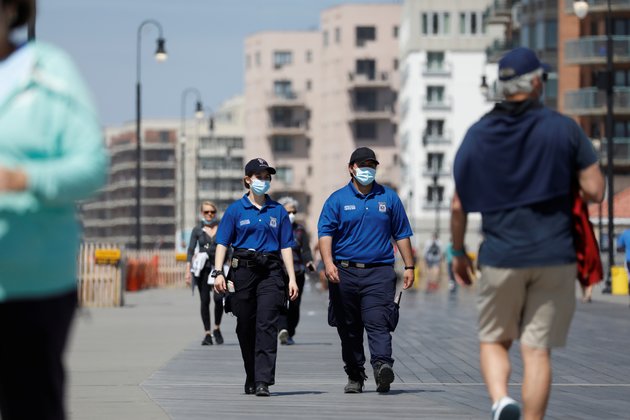 There are 5.2 million COVID-19 infections worldwide, with more than 338,000 global deaths.

The U.S. continues to be the epicenter of the contagion with 1.6 million cases. Russia comes in second with nearly 336,000 infections, closely followed by Brazil with almost 331,000 cases.

"In a sense South America has become the new epicenter of the disease," said Michael Ryan, director of the WHO emergency program. "The most affected is clearly Brazil at this point," he added.

A gravedigger at a cemetery outside Sao Paulo said, "We've been working 12-hour days, burying them one after the other. It doesn't stop."

The New York Times says at least 161 children in New York have been afflicted with "a mysterious syndrome linked to the coronavirus."

The newspaper reports that a public laboratory is conducting "intensive testing" from tissue samples from one of the dead children. New York State medical doctors and scientists are also conducting investigations.

A malaria drug that U.S. President Donald Trump says he has been taking to avoid contracting COVID-19 has been linked to increased risk of death in patients with the disease, according to a study published in a prominent medical journal.

The study, published Friday in The Lancet, monitored more than 96,000 COVID-19 hospital patients. It found that people treated with hydroxychloroquine, or the related drug chloroquine, were more likely to develop an irregular heartbeat that could cause sudden death.

Trump began touting the use of the malaria drug as a coronavirus treatment in early April and said earlier this week he was taking it as a preventive measure.

The authors of the study suggested that hydroxychloroquine should not be used to treat COVID-19, outside of clinical trials, until results from those trials are available and confirm its safety for COVID-19 patients.

In April, the U.S. Food and Drug Administration also issued a warning about the use of hydroxychloroquine to treat the new coronavirus.

Another new study, this one by the World Health Organization, concluded that the pandemic is interfering with immunization against diseases that could risk the lives of nearly 80 million infants. Global health officials say over half of 129 countries that had immunization data reported the suspension of vaccinations against cholera, measles, polio and other diseases.

The Africa Centers for Disease Control and Prevention said Friday that coronavirus cases on the continent have topped 100,000. Africa has so far not experienced the high numbers of cases seen in other parts of the world.

More than 3,100 people have died on the continent of 1.3 billion people, and the Africa CDC director says the continent has seen about the same number of new cases in the past week as the week before. "We hope that trend continues," Africa CDC Director Dr. John Nkengasong said.

"For now, COVID-19 has made a soft landfall in Africa, and the continent has been spared the high numbers of deaths which have devastated other regions of the world," said Dr. Matshidiso Moeti, WHO Regional Director for Africa.

The WHO said an early analysis shows that the lower mortality rate could be the result of Africa's young population, with more than 60% of the continent under the age of 25.

Despite the grim COVID statistics in the U.S., President Trump has made clear he wants state governors to do more to ease virus-related restrictions.

He called Friday for governors to allow places of worship to open this weekend. Trump told reporters at the White House that if governors do not allow in-person religious services to resume, he will "override" them. He did not specify how he would do that.

"In America, we need more prayer, not less," Trump said.