Scientists await first hatching of cranes in Ireland in 300 years 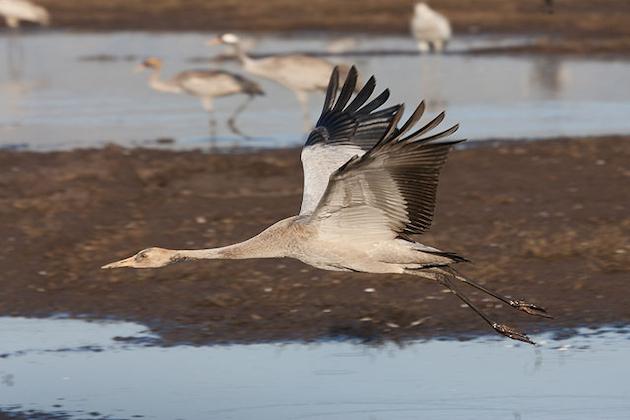 DUBLIN, Ireland: Following a 300 year absence, the crane has been spotted returning to Ireland.

Bird watchers hope that the crane could be the first to breed in Ireland in centuries.

This crane has been spotted on peat bogs being rehabilitated by land owner Bord na Mna.

"While we have these birds coming to Ireland during the winter, we generally haven't seen them in the breeding season," said lead ecologist Mark McCorry.

"So last year, when they were discovered, they were the first pair that were in a nest during the breeding season.

"So it's really a great indication that they look like they're ready to re-colonise Ireland again," he said.

"It's a very iconic species in Ireland, it's associated with folklore, as well - there's lots of stories around it."

McCorry added that he was "reasonably optimistic" that the birds would successfully breed.

"Generally with these birds, when they pair up and they're young, it takes them a few years, or a few goes, before they become successful breeders," he said.

McCorry added that cranes have begun to re-establish themselves in Ireland, as others were spotted in County Dublin last autumn.

"So it's not beyond the bounds of possibility that this pair of cranes are not the only pair now in Ireland.

Adult cranes stand at about 4 feet in height and can have a wingspan of more than 7 feet.

Niall Hatch, of Birdwatch Ireland, said it would be "wonderful" if the "spectacular species" returned.

"It's the largest bird that most people would ever see in Ireland. It's enormous and it's a real part of our heritage. So it would be lovely to have it back.

"We're hoping that as conditions improve in Ireland, perhaps we'll see more of them come back, especially if they do breed and rear chicks," he said.

"The hope would be that those chicks in future years will return and start to breed in the same areas as well, and the population might build up."