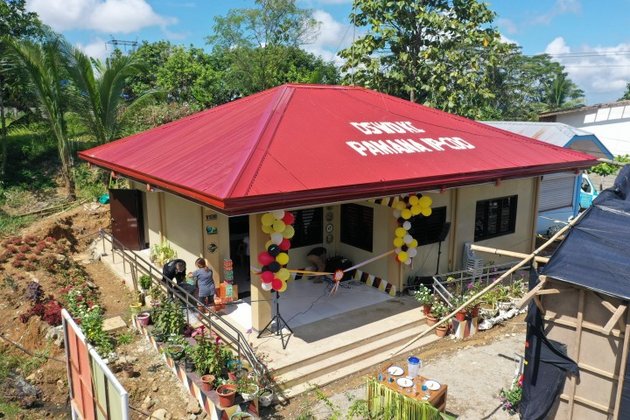 The turnover ceremonies in Barangay Maligaya and Barangay Sta. Cruz were held on May 11 and April 29, 2021, respectively.

The building amenities are in-kind counterparts from the local government unit (LGU) of Sta. Cruz. The facility is built not just for the Manobo tribal community but including the non-Indigenous Peoples in the barangay.

The project, which was completed on December 12, 2020, is expected to serve 206 household beneficiaries in the said barangay.

Hawudon Gawahon Emeliano Pugosa, Sta. Cruz Community Sub-Project Management Committee chairperson, said that the IPs have a huge role in nation-building, adding that many IPs join the leftist movement due to lack of government projects or services in the far-flung tribal communities.

The country is experiencing over 50 years of communist insurgency and is now doubling its effort to combat and quash the rebellion through the "whole-of-nation" approach by the National Task Force to End Local Communists Armed Conflict (NTF-ELCAC).

DSWD Caraga PAMANA IP-CDD focal person Annabella Madelo, during the turnover ceremony last April 29, said that the project was completed because of the cooperation and unity of the community as well as the contribution of the LGU.

"On behalf of our OIC-Regional Director Ramel F. Jamen, gipaabot namo among mainiton nga congratulations sa katawhan sa Barangay Sta. Cruz ug mainiton nga pasalamat sa LGU sa Rosario, ug sa suporta sa tribung Manobo (we would like to extend our warmest congratulations to the residents of Barangay Sta. Cruz as well as our warmest gratitude to LGU of Rosario and the support of the Manobo tribe)," she added.

In the mountain barangay of Maligaya, an 89 sq.m. tribal center was also turned over, complete with two restrooms, an office, a small kitchen, a rainwater collector, wall fans, and a water dispenser.

The construction of the tribal center, which costs Php3.4 million, started on September 11, 2020, and was completed on December 22, 2020. The subproject targets to benefit 98 household beneficiaries in the area.

Rosario Municipal officials were thankful to the government for the Himunanan Tu Tribu and commit to taking care of the said tribal centers.

"Ang ato local government, ang ato municipal mayor, kami sa legislative, andam gyud kami mag-suporta kung unsa mga kakuwangon (The local government, the mayor, and we at the legislative body are ready to support what will be needed for the project)," Rosario Councilor Rex Fuentes said during the turnover ceremony in Barangay Maligaya.

The PAMANA, under the Office of the Presidential Adviser on the Peace Process (OPAPP), is the government's framework for peace and development. It is implemented in conflict-affected communities, as well as in areas covered by existing peace agreements.

Meanwhile, KALAHI-CIDSS falls under the second strategic pillar of the PAMANA framework, which is building resilient communities. The project objective is to improve the access of KALAHI-CIDSS areas classified as conflict-affected barangays (CABs) to basic social services and responsive, transparent, and accountable local governments. (DSWD-Caraga/PIA-Agusan del Sur)