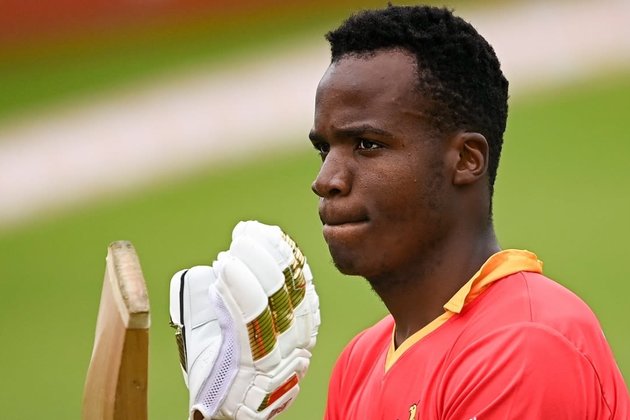 A rapid half-century from Milton Shumba - the first of his T20I career - powered Zimbabwe to a six-wicket victory against Scotland in Edinburgh. Set 178 for the win, Zimbabwe chased down the target with five deliveries to spare, and in the process, sealed the three-match series 2-1.

Zimbabwe began their chase well, thanks to a 60-run opening stand between Regis Chakabva (25) and the captain Craig Ervine (25). However, both batters fell in quick succession, and Zimbabwe soon found themselves precariously placed at 63 for 3 in the 10th over, needing another 115 runs from just 64 balls.

Shumba and Wessley Madhevere then stabilised the innings, keeping the scoreboard ticking, but the pair initially struggled to find the boundaries - Zimbabwe managed just five between the 10th and 16th overs - and eventually found themselves staring at a required run rate of 14.

The momentum swung decisively Zimbabwe's way in the 17th over, bowled by Alasdair Evans, who till then had conceded just 15 runs. Shumba clubbed Evans for three consecutive sixes, before Madhevere added a fourth, as the visitors took 25 runs off the bowler. Shumba and Madhevere followed it up with a 14-run over off Safyaan Sharif, meaning Zimbabwe needed just 17 from the last two overs.

Madhevere was eventually run out for 43, ending a fourth-wicket partnership of 99 runs, but Shumba remained unbeaten on 66 to take Zimbabwe home. In total, Shumba stroked two fours and six sixes.

Earlier, Scotland, opting to bat, had put up 177 for 4, on the back of a 30-ball 54 from the opener George Munsey. Scotland were in a spot of bother at 77 for 3 in the ninth over, but handy knocks from Richie Berrington (44) and Calum MacLeod powered the team to a competitive total.