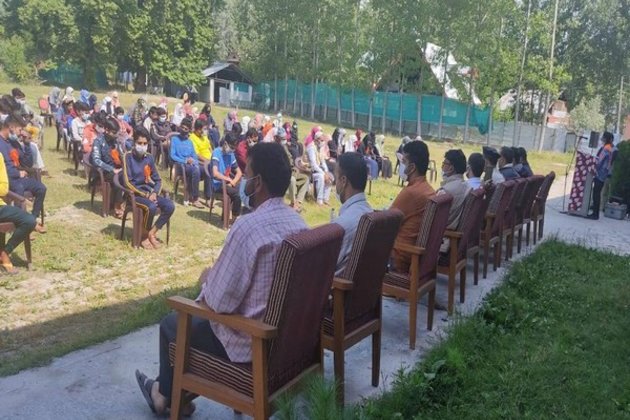 Srinagar (Jammu and Kashmir) [India], October 23 (ANI): A resolution was passed against the innocent killings in Kashmir by Pakistan sponsored terrorists on Saturday at the community conference centre, Zakura in Srinagar.

The resolution was passed during a day-long conference on "Kashmir: An Unfinished Agenda of Partition" was organized by Jammu and Kashmir Youth Development Forum (JKYDF).

The speakers highlighted how Pakistan provided funds and supported anti-national groups and terrorist organizations to destroy the culture of Jammu and Kashmir and kill innocent people in the name of the so-called "Azadi".

He further said that October 22 is a call to all peace-loving citizens to rise and defeat the communal game of Pakistan.

"Pakistan has all along used terrorism and covert action as an instrument of state policy against India. It has recruited, trained, financed, armed and infiltrated terrorists in India and has provided sanctuary to anti-Indian elements. Despite the global outcry against terrorism and the public posture adopted by Pakistan, and notwithstanding a string of confidence-building measures adopted by the Governments of India and Pakistan," Ganderbali added.

"Pakistan has not yet dismantled the terrorist infrastructure in the territory under its control. This infrastructure is continued to be sponsored and used by Pak-ISI to recruit, train and finance terrorists and infiltrate them into India," he further said.

Advocate Altaf Ahmad, another speaker at the Conference, said that October 22, 1947, is the day of the invasion of Jammu and Kashmir.

"To call it a tribal raid is a misnomer. Tribals were used by the Pakistani Army as the frontal hordes to hide the nature of the regular invasion of Jammu and Kashmir. The day is the Darkest Day because this invasion broke up the state and rendered thousands and lakhs of Hindus and Sikhs as refugees in their own motherland," he said.

"Thousands were killed and abducted during the invasion. We have to remember all those who perished during the invasion. We have also to remember that Pakistan broke up the state and captured almost half of it. The people in Pakistan Occupied Jammu and Kashmir are denied all rights of freedom and during these years we have only seen a sham democracy on that side and also the colonization by the Pakistani citizens. This day reminds us of the challenges to the peace, harmony, unity and integrity of the state. October 22, 1947, was also the beginning of an asymmetric war against India. This asymmetric war is continuing till now and devising a befitting response to put an end to this war is a challenge before India and particularly the people of Jammu and Kashmir," he added.

A resolution was passed against the innocent killings in Kashmir by Pakistan sponsored terrorists and an appeal was made to international organizations and community to pressurize Pakistan to stop sending terrorists to Jammu and Kashmir and also stop fake propaganda on social media against India. (ANI)