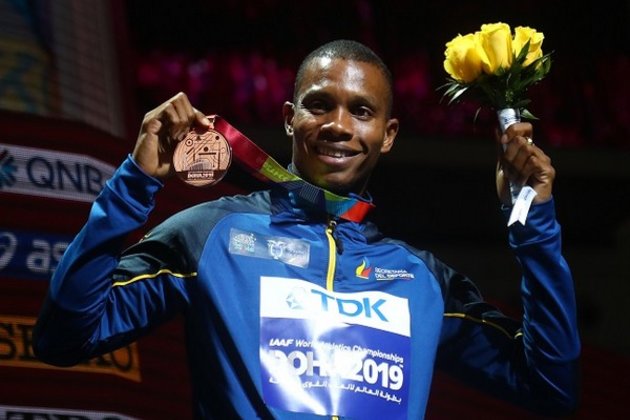 Esmeraldas [Ecuador], October 24 (ANI): Ecuadorian sprinter Alex Quinonez was found dead in the street in Guayaquil on Friday, according to the country's Sports Ministry.

Quinonez, Ecuador's world 200m bronze medallist, passed away at the age of 32.

"With great sadness, we confirm the murder of our sportsman Alex Quinonez," the Ecuadorian Sports Ministry announced on Twitter as reported by World Athletics.

"We have lost a great sportsman, someone who allowed us to dream, who moved us....he was the greatest sprinter this country produced," it added.

Barcelona Football Club on Saturday held a minute of silence in Quinonez' honour as he was a member of their athletics team.

"Brother, I cannot believe it's true. We do not deserve this. What awful news. It's a shame that life is such, but to die one has to be alive. You are great and I will always cherish you in my heart," said world and Olympic 400m silver medallist Anthony Zambrano, a training partner of Quinonez, in a social media post.

According to World Athletics, with his third-place finish in Doha two years ago, Quinonez became the first Ecuadorian athlete to win a global medal in a track event.

Quinonez qualified for the Tokyo Olympic Games this year but was suspended by the Athletics Integrity Unit in July when he was charged with breaching the whereabouts rules. (ANI)