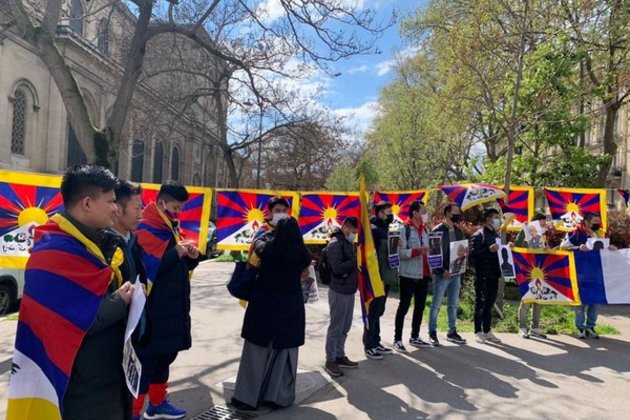 Lhasa [Tibet], June 21 (ANI): Tibetans on the occasion of World Refugee Day urged the international community to support them and collectively stand together against China, and not to forget Tibet.

Benedict Rogers a human rights activist and writer highlighted the Chinese repressions of Tibet and said that for many years Tibet was a cause celebre, brought to the world's attention both by the courageous efforts of Dalai Lama and with the support of celebrities like Richard Gere, Brad Pitt and the Beastie Boys, reported Tibet Rights Collective (TRC).

The film Seven Years in Tibet did a lot to keep Tibet's plight in the public consciousness. The Dalai Lama's world tours, public lectures and meetings with Presidents, Prime Ministers and Popes helped keep the situation on the global agenda, added Rogers.

However, several factors have combined to overshadow Tibet as a cause. The Ukraine conflict has now taken the centre stage with 13 million people who have fled their homes and approximately five million leaving the country and another eight million internally displaced within Ukraine.

Rogers underscored that amidst the world's many challenges, there is one place which is in danger of being forgotten - and which we must not forget: Tibet.

He also emphasized the growing influence of the Chinese Communist Party regime, and its aggressive use of it. In Hollywood and Wall Street, throughout the great universities of the world, in the United Nations and other multilateral organizations and in some corridors of power and some newsrooms and even in the Vatican, Beijing's tentacles have stretched out to silence its critics, reported TRC.

Using a combination of financial coercion and threat, the Chinese regime has ensured that Tibet's champions are sidelined. Pope Francis is the first pontiff in recent times not to meet the Dalai Lama.

Moreover, Dalai Lama is no longer able to travel abroad. Due to his age and health, the 86-year-old Tibetan spiritual leader has not travelled outside India since 2018.

The Book of Joy - a collection of conversations between the Dalai Lama and South Africa's Archbishop Desmond Tutu - and the accompanying documentary film - helped keep Tibet in people's minds, and Parliamentarians around the world continue to do what they can to highlight Tibet, but without Dalai Lama's presence on the world stage the issue is declining in focus, said Rogers.

Ironically, attention on China's human rights record has grown - but Tibet's risks are being eclipsed by the shocking evidence of genocide of the Uyghurs, the appalling dismantling of Hong Kong's freedoms and autonomy, accusations of forced organ harvesting and increasing threats to Taiwan.

All these issues need attention and it is very welcome that the world is starting to wake up to the Chinese Communist Party's atrocities, but we must ensure that Tibet is always included and never forgotten when we focus on Beijing's crimes, said Rogers.

On the World Refugee Day which is observed on June 20, let us not forget Tibet. Let us ensure that as we focus on the crisis in Ukraine, think about Myanmar, remember North Koreans escaping Kim Jong-Un's tyranny, and campaign to stop the genocide and slavery of the Uyghurs and to free Hong Kong's political prisoners, we also remember Tibet, urged Rogers. (ANI)

DELFT, Netherlands: IKEA officials said this week that the furniture retailer's warehouses in Europe are as full as they were ...

WASHINGTON D.C.: Due to the record high trade deficit and a resurgence in COVID-19 infections that curbed spending on services, ...

TAIPEI, Taiwan: The world's fourth largest chip designer by revenue, Taiwan's MediaTek, has told Reuters that it plans to create ...

GENEVA, Switzerland: Swiss pharmaceutical group Novartis has said, as part of its previously announced restructuring program, that it could cut ...

LONDON, England: A second referendum on Scottish independence is set to be held in October 2023. The Scottish government, led ...

Unable to staff airports, Germany to bring in foreign workers

BERLIN, Germany: A German Interior Ministry spokesperson has said that in a bid to relieve airports overwhelmed by staff shortages ...

PARIS, France: In a written statement made this week confirming a report from broadcaster RTL, France's energy ministry said the ...

WATFORD, UK: Watford F.C. has cancelled a friendly match against the Qatar national team due to the Gulf country's human ...

JAKARTA, Indonesia: Indonesian President Joko Widodo has said that he will urge his Russian and Ukrainian counterparts to open peace ...