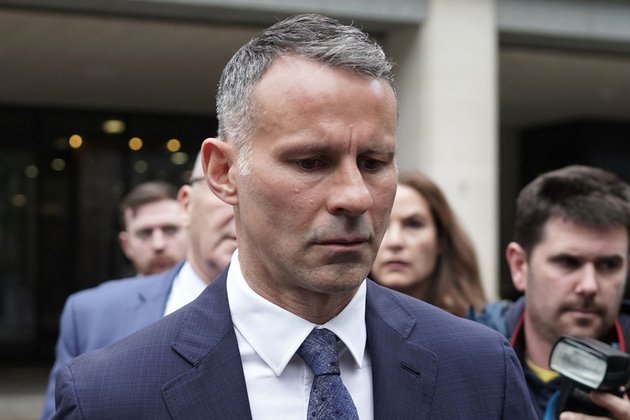 The wing legend allegedly attacked his ex-girlfriend in November 2020

Manchester United legend Ryan Giggs has stepped down as manager of the Wales national team.

The 1990s football icon temporarily left the role after he was charged with assaulting his ex-girlfriend. On Monday evening, though, he announced his decision which came after talks with Welsh FA officials.

Giggs denies the charges leveled against him, which led to the 48-year-old stepping down initially in November 2020 as Rob Page took over.

While attempting to clear his name, however, he does not want his legal troubles to act as a distraction to his country's stars as they prepare for their first World Cup appearance since 1958, with legal proceedings unlikely to take place before August at the earliest.

"It has been an honour and a privilege to manage my country, but it is only right that the Wales FA, the coaching staff and the players prepare for the tournament with certainty, clarification and without speculation around the position of their head coach," Giggs said in a statement.

The Class of '92 graduate pointed out that he had pleaded not guilty to the accusations being dealt with at Manchester Crown Court, and while confident in the judicial process, he had hoped that the case would have been heard earlier so that he could resume his managerial career.

"Through nobody's fault the case has been delayed," noted Giggs, who does not "want the country's preparations for the World Cup to be affected, destabilized or jeopardized in any way by the continued interest around this case."

Giggs said that he had been fortunate enough to have enjoyed some "unforgettable moments" during his three years as Wales boss while proud of his record with "special times" to "cherish forever".

"It has been a pleasure to work with such well-established, senior professionals, and it has given me immense pride to watch so many young players progress into the national squad and flourish in the proud red colours of our country," he went on.

"I am touched and grateful to our passionate supporters for following us all over the world. To see nearly 3,000 of our loyal, traveling fans in Baku for the European Championship qualifier against Azerbaijan made me appreciate the sacrifices people make to watch our nation play."

Giggs lamented not being able to continue the journey together as he believes that Wales' extraordinary group will make the country proud in Qatar.

Thanking the Welsh FA's' higher-ups, the players, staff, and supporters while wishing them success at the World Cup, Giggs stated that it is his intention to resume his managerial career at a later date.

Accused of causing his ex-girlfriend actual bodily harm at his Worsley home in Greater Manchester, Giggs had his trial adjourned until August 8 due to Manchester Crown Court suffering from a backlog of cases.

After leading Wales to World Cup qualification sealed by a 1-0 playoff final win over Ukraine in Cardiff, previous interim boss Page will lead his nation in Giggs' now permanent absence after Page's contract was extended.

Wales have been drawn into Group B with England, the USA, and Iran.

SYDNEY, NSW, Australia - Stocks in Asia rose on Tuesday after China announced it would halve quarantine from 14 days ...

LONDON, England: As prices in stores throughout Britain rise, British consumers shopped less in May and also expressed less confidence ...

As first in US, driverless taxis picking up customers in San Francisco

NEW YORK, New York - The euphoria on Wall Street of late last week was absent on Monday as all ...

WASHINGTON D.C.: In May, sales of new U.S. single-family homes unexpectedly increased, but this is expected to be temporary, as ...

LONDON, England: British Airways' staff at London's Heathrow airport has voted to strike due to pay disputes. Amidst an already ...

BRUSSELS, Belgium - Some Ryanair cabin crew went on strike Friday in Belgium, Spain, and Portugal over pay and working ...

UK government pledges action after inflation rises 9.1% in May

LONDON, England: Prices for British homes this month rose at the slowest rate since January, as the cost of living ...

AMSTERDAM, Netherlands: Amidst Europe's response to Moscow's invasion of Ukraine and subsequent reduction of the deliveries of Russian gas, Germany, ...

NEW DELHI, India: The European Union and India have relaunched talks to implement a free trade agreement, aimed to be ...

UK Armed Forces Chief: British must be capable of fighting in Europe

LONDON, England: UK General Patrick Sanders, the new Chief of the General Staff, has told troops that Britain must be ...

War for the Planet of the Apes