Ahead of Summit, EU Appears Unified on Ukraine's Candidacy 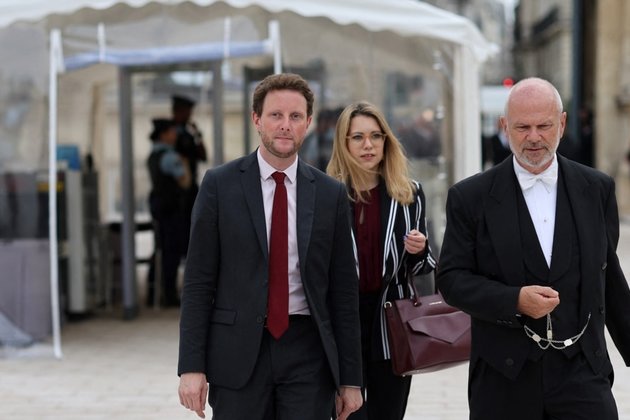 Paris - European Union leaders hold a key summit Thursday and Friday with a top item on their agenda - okaying Ukraine's bid to be a candidate for the bloc - appearing to be on track. The meeting comes amid heightened tensions between Europe and Moscow as the war drags on in Ukraine.

Hours before the European Union summit, France - which currently holds the presidency of the Council of the EU - offered a confident assessment of Kyiv's candidacy application.

France's Europe Minister Clement Beaune said there is a 'total consensus' in favor, following discussions among EU country representatives. Now, he said, it's up to their leaders to formally vote on the candidate status Thursday, along with those of Moldova and Georgia.

"Ukrainians are ready to die for the European perspective. We want them to live with us the European dream," der Leyen said.

The URL has been copied to your clipboard

But it seems unlikely EU leaders will agree to Ukraine's call for fast-tracking its application. Being admitted into the bloc can take years, or decades.

'I think if there were a fast track [for Ukraine], then it would provoke some uproar from the western Balkan countries, who have been in the anti-chamber of this candidate status for a while now," said Tara Varma who heads the Paris office of the European Council on Foreign Relations policy institute.

"I think the Europeans need to be quite careful about how they deal with this,' Varma said. 'Honestly, granting candidate status in such a short period would already be quite a revolution."

France is pushing for an intermediary association for Ukraine and other non-EU members in the meantime.

This week's summit follows a visit to Ukraine by leaders of France, Germany and Italy - the EU's three most powerful members - along with Romania. Beyond the symbolism, they promised to deliver more weapons - a source of tension with Ukraine, among other issues.

But while EU leaders have displayed remarkable unity in agreeing to ever-stronger sanctions against Russia over the war, European citizens are feeling its economic backlash.

"Europeans will also have to think about how they deal with the situation at home as well. Because we're seeing an increasing sense of worry from the European population side and also the beginning of a war fatigue,' said Varma.

Also up for discussion this summit will be the bloc's deteriorating relationship with Moscow. Over the past week, Russia has cut off natural gas exports to more EU countries, notably heavyweights France and Germany. It's also threatened EU and NATO member Lithuania over its rail transit blockade of some goods to the Russian enclave of Kaliningrad.

Meanwhile, EU foreign policy chief Josep Borrell has called Russia's own blockade of Ukraine's grain exports - which are critical for some of the world's poorest countries - a war crime.

DELFT, Netherlands: IKEA officials said this week that the furniture retailer's warehouses in Europe are as full as they were ...

WASHINGTON D.C.: Due to the record high trade deficit and a resurgence in COVID-19 infections that curbed spending on services, ...

TAIPEI, Taiwan: The world's fourth largest chip designer by revenue, Taiwan's MediaTek, has told Reuters that it plans to create ...

GENEVA, Switzerland: Swiss pharmaceutical group Novartis has said, as part of its previously announced restructuring program, that it could cut ...

US sanctions causes 90 percent drop in chips sent to Russia

WASHINGTON D.C.: U.S. Commerce Secretary Gina Raimondo has said that since the U.S. and its allies imposed sanctions on Moscow ...

LONDON, England: A second referendum on Scottish independence is set to be held in October 2023. The Scottish government, led ...

Unable to staff airports, Germany to bring in foreign workers

BERLIN, Germany: A German Interior Ministry spokesperson has said that in a bid to relieve airports overwhelmed by staff shortages ...

PARIS, France: In a written statement made this week confirming a report from broadcaster RTL, France's energy ministry said the ...

WATFORD, UK: Watford F.C. has cancelled a friendly match against the Qatar national team due to the Gulf country's human ...

JAKARTA, Indonesia: Indonesian President Joko Widodo has said that he will urge his Russian and Ukrainian counterparts to open peace ...