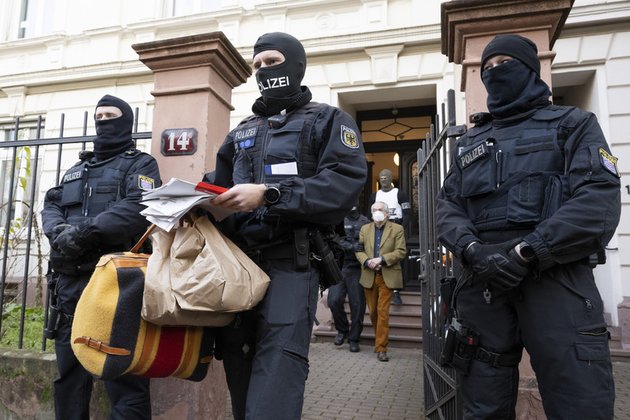 Authorities have detained 25 people, including ex-police and military personnel, who allegedly wanted to reinstate a monarchy

SWAT deployments, more than 130 searches and a total of 25 arrests have been carried out in Germany and several neighboring countries in what the media is calling one of the largest counter-terrorist operations in the nation's history.

The suspects include former members of the military and police force, as well as a Russian national. They are believed to have conspired to depose the current government by force, and reinstate a regime modeled on the German Reich of 1871.

In the early hours of Wednesday, some 3,000 German police officers stormed apartments located in 11 of the country's regions, authorities revealed.

The group members are said to be adherents of the QAnon ideology, who believe Germany is currently being controlled by the 'deep state'.

Having started their preparations for a coup back in November 2021, the suspects formed a 'military wing,' and were actively attempting to recruit military personnel currently serving in the Bundeswehr.

Apart from storming the country's parliament, the Bundestag, and taking lawmakers hostage, the suspects also supposedly intended to target Germany's energy infrastructure in the hope of triggering civil-war-like clashes.

The conspirators also allegedly formed a shadow cabinet, planning to put a nobleman from Frankfurt, Prinz Heinrich XIII, at the helm for an interim period following the coup.

Birgit Malsack-Winkemann, a former MP for the right-wing Alternative for Germany party, was among those arrested and also had her property searched, ZDF media outlet reported.

Among the suspects is a Russian national identified as Vitalia B. She allegedly helped the would-be ruler to establish contacts with Russia, though apparently to little avail. As Germany's federal prosecutor's office noted, "According to the investigations [conducted] so far, there are no clues [suggesting] that their contact partner reacted positively to their request."

Meanwhile, Russia's embassy in Berlin told the media that it had not been notified by German authorities that a Russian national had been detained. The diplomats added that they would send an inquiry to the German prosecutor's office, saying they are ready to provide all necessary assistance to the woman.

Commenting on the raids, Kremlin spokesman Dmitry Peskov said on Wednesday that officials in Moscow had learned about the situation from the media, describing it as Germany's "internal problem."

US concerned over rights at Mexico auto factory, seeks corrections

WASHINGTON D.C.: The US has again asked Mexico to investigate claims that workers at an auto parts facility of American ...

UK airline Flybe goes out of business, cancels all flights